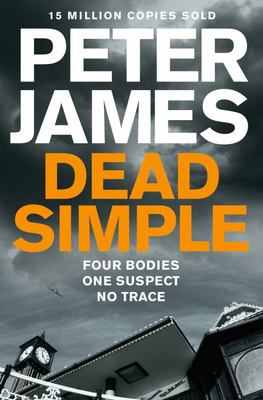 It was meant to be a harmless stag-night prank. A few hours later Michael Harrison has disappeared and his friends are dead. With only three days to the wedding, Detective Superintendent Roy Grace--a man haunted by the shadow of his own missing wife--is contacted by Michael's beautiful, distraught fianc e, Ashley Harper. Grace discovers that the one man who ought to know Michael Harrison's whereabouts is saying nothing. But then he has a lot more to gain than anyone realizes, for one man's disaster is another man's fortune.

This is the book that started it all. It's Dead Simple. Dead Simple was the first book by number one bestselling crime and thriller writer Peter James to be part of the multi-million-copy series featuring the definitive Brighton detective, Roy Grace.

Peter James is a multi-No. 1 bestselling author. His books have sold more than 13 million copies worldwide and been translated into 35 languages. 2014 marks 10 years of the famous Brighton detective, Roy Grace. Peter James studied at Charterhouse and then film school, and worked in North America as a film producer and scriptwriter. In 2014, Roy Grace will appear on stage for the first time, with a play of "The Perfect Murder" touring UK theatres. Former Chair of the Crime Writers Association, James has also collaborated with writer Ian Rankin on a short story "In the Nick of Time", which brings together Roy Grace and Ian Rankin's DI Rebus. Connect with Peter James through www.peterjames.com, on Twitter @peterjamesuk, or www.facebook.com/peterjames.roygrace